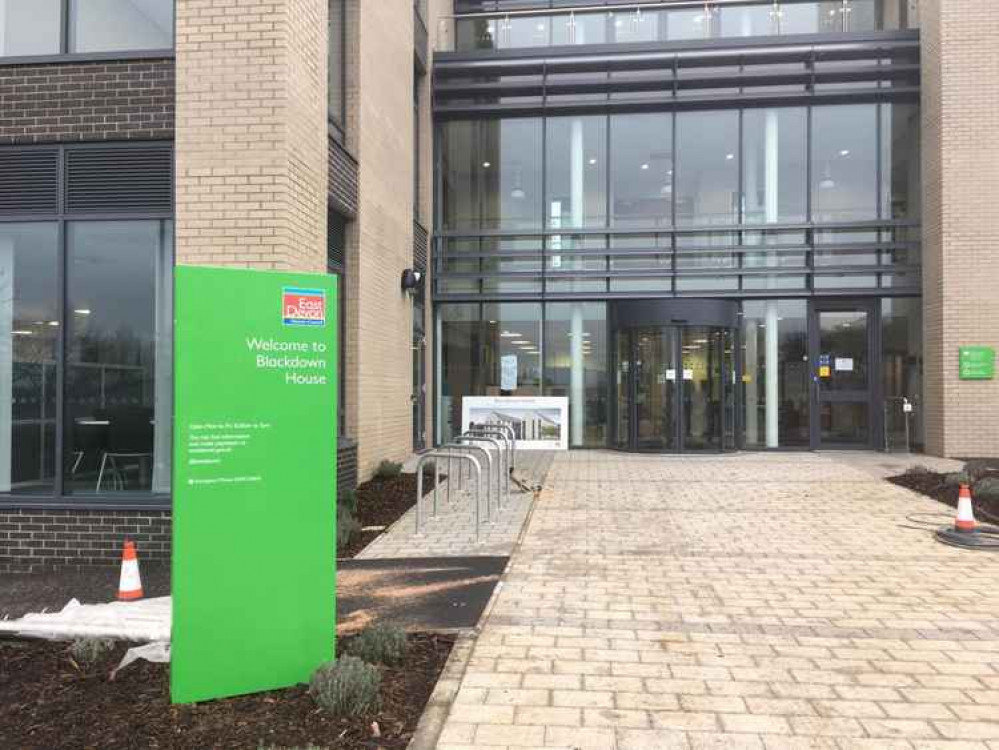 East Devon District Council's HQ, where meetings will have to be held in person again

The decision to make local councils stop meeting via Zoom and return to face-to-face sessions next month has been criticised across the county, and described as a 'terrible backward step' by one of Sidmouth's district councillors.

Last week, the minister for Local Government, Luke Hall, wrote to council leaders telling them the emergency legislation allowing virtual council meetings will not be extended beyond May 7.

All councils – from Devon County down to the parish councils – will have to resume meetings in person, and the same applies to the Dartmoor and Exmoor National Park Authorities, the Devon and Somerset Fire Authority, and the Police and Crime Panel.

However, they will be encouraged to continue live-streaming their meetings to meet their legal obligation to ensure that members of the press and public can watch the proceedings without the need to attend in person.

How local councils have reacted

The district councillor for Sidmouth Town, Cllr Denise Bickley, said: "This is a terrible backward step when virtual meetings have been working perfectly well, saving time, money, emissions, and meaning councillors have been able to attend for more meetings than they would in person. I'm very angry."

A spokesman for North Devon district council said the decision was 'a major backwards step', and Teignbridge's managing director Phil Shears said it was 'very disappointing'.

A Devon County Council spokesman said: "This decision presents all local authorities with a complex challenge in deciding how best to hold face-to face council meetings safely after May 7.

"We will be looking very carefully at the detail of the new guidance before considering the best approach for the County Council."

And Devon's Liberal Democrats have criticised the plans, with leader of the Lib Dem Group on Devon County Council, Cllr Alan Connett, saying: "Forcing local councils to meet face-to-face in just over a month's time makes no sense and potentially puts people at risk.

"Making large groups of people meet indoors for meetings which often last more than two hours, when we're trying to stop the spread of Covid-19, is unbelievably daft.

"This affects councillors and council staff. Some may have had Covid jabs, some not and some may have clinically vulnerable family at home.

"It should be up to our local councils to decide when it is safe to return – not the Conservative Government."

Why the Government made this decision

Luke Hall MP, Minister of State for Regional Growth and Local Government, in his letter to councils, said: "Extending the regulations to meetings beyond May 7 would require primary legislation. The Government has considered the case for legislation very carefully, including the significant impact it would have on the Government's legislative programme which is already under severe pressure in these unprecedented times.

"We are also mindful of the excellent progress that has been made on our vaccination programme and the announcement of the Government's roadmap for lifting Covid-19 restrictions. Given this context, the Government has concluded that it is not possible to bring forward emergency legislation on this issue at this time."

He added: ""While local authorities have been able to hold meetings in person at any time during the pandemic with appropriate measures in place, the successful rollout of the vaccine and the reduction in cases of Covid-19 should result in a significant reduction in risk for local authority members meeting in person from May 7, as reflected in the Government's plan to ease Covid-19 restrictions over the coming months."

Don't get caught out by Easter changes to bin collections