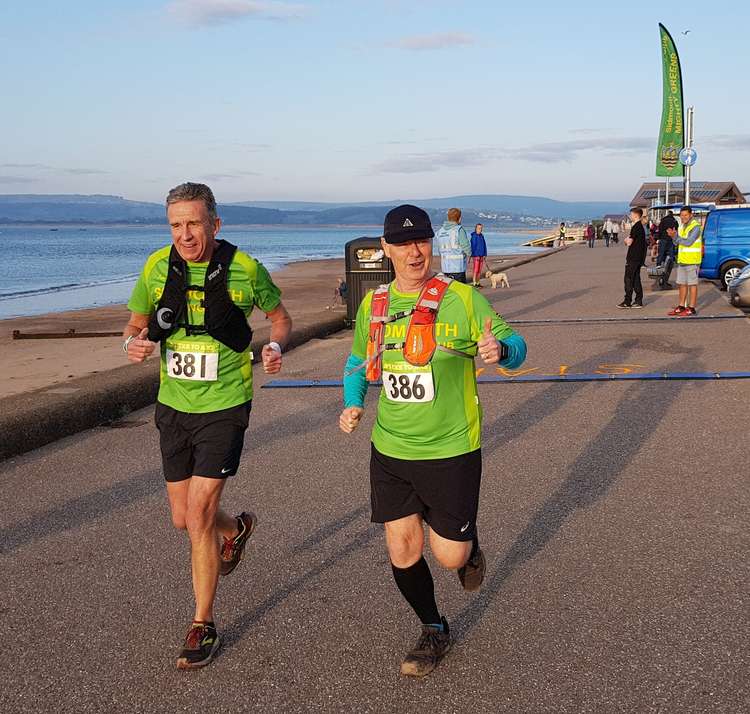 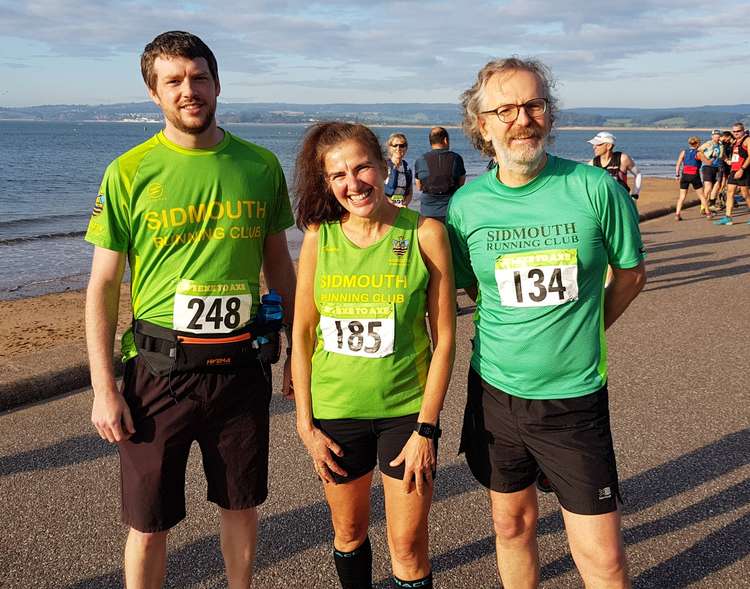 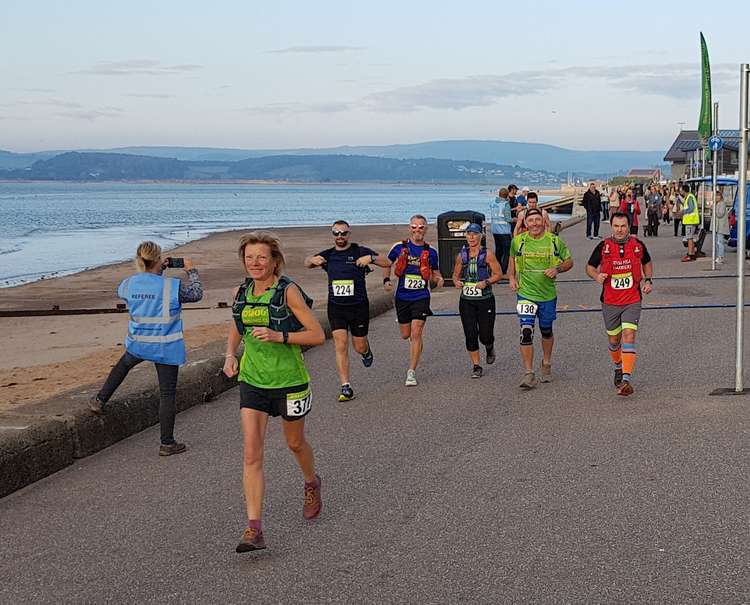 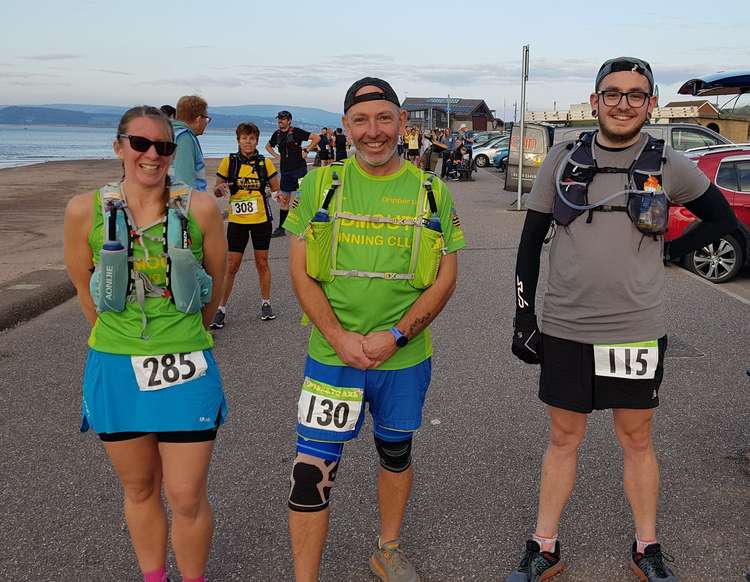 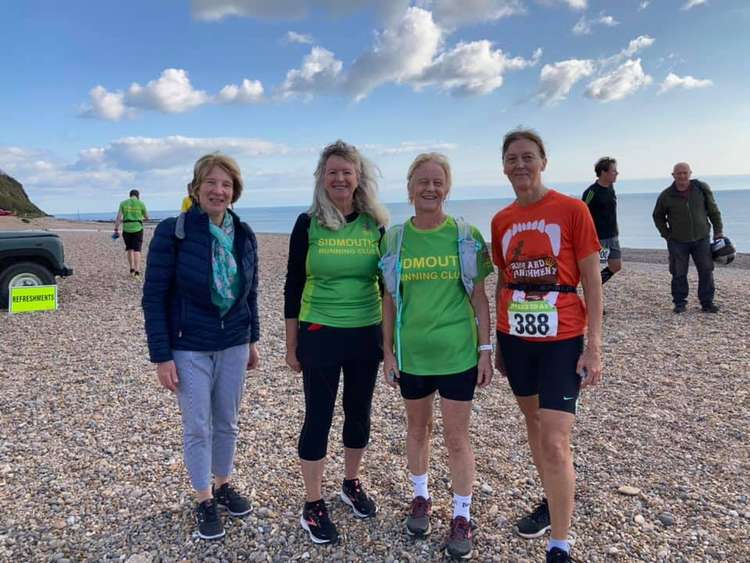 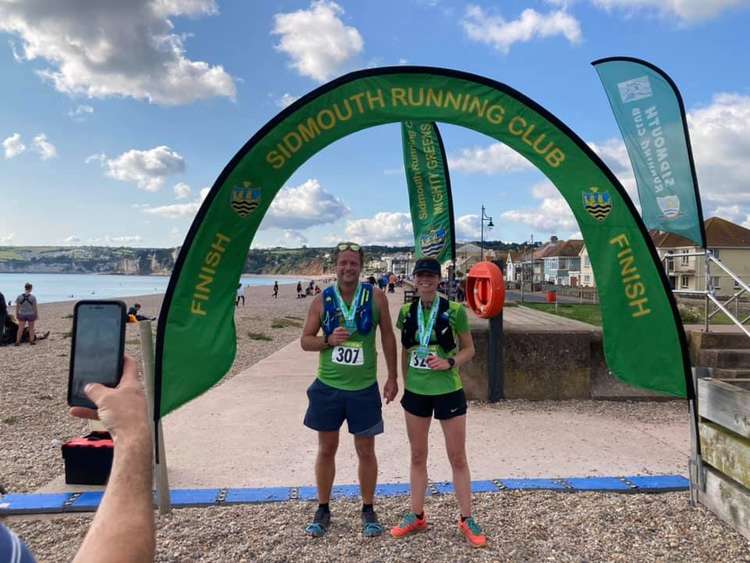 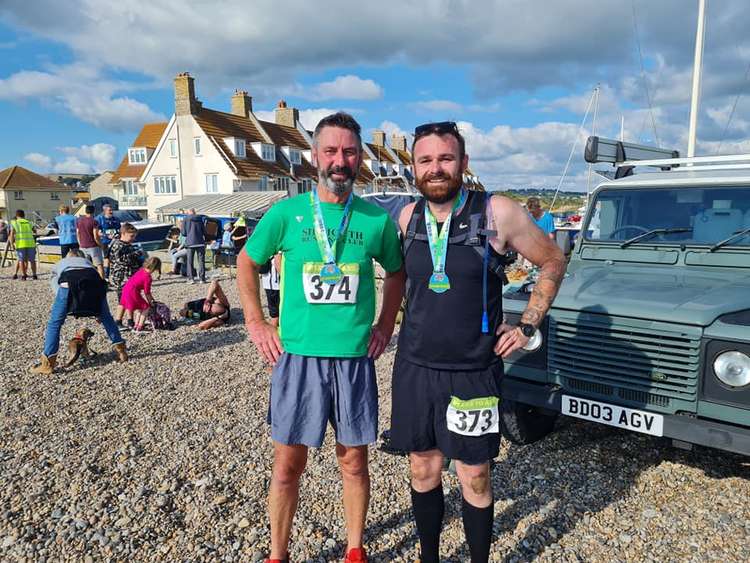 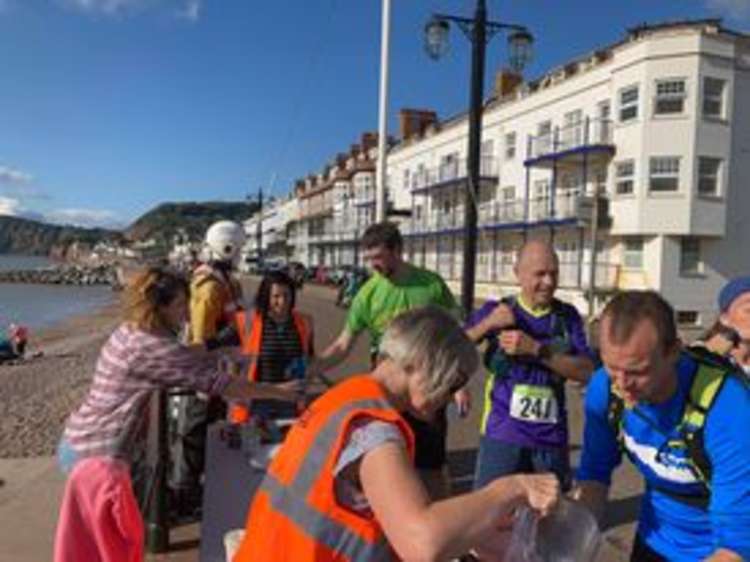 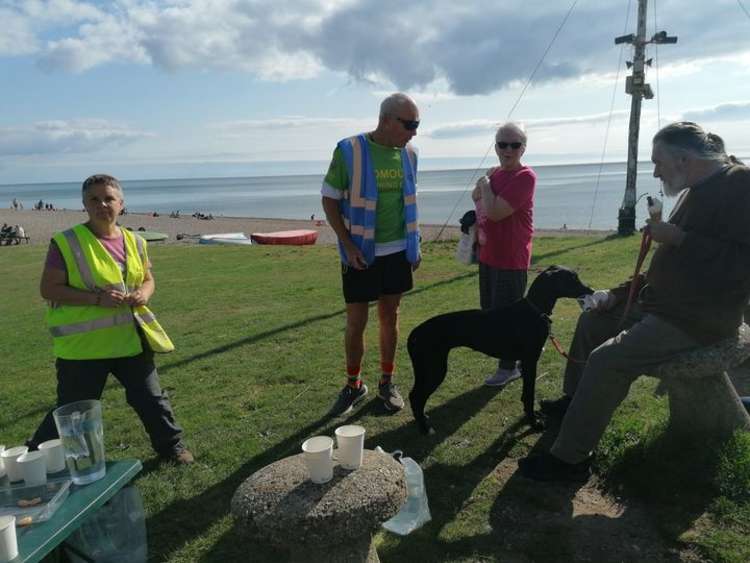 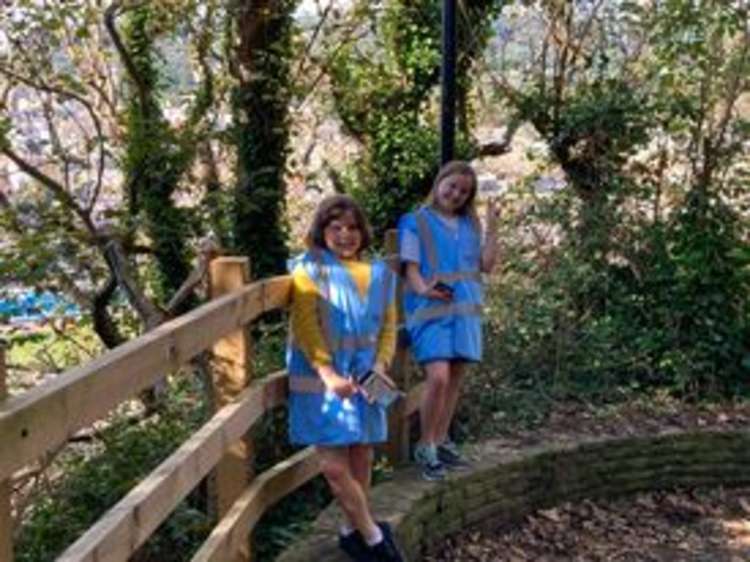 'Brutal', 'tough', 'harder than an ultra-marathon' were some of the more printable descriptions of JP's Exe to Axe race which Sidmouth Running Club organised and ran on Sunday.

The 22 mile race which starts on Exmouth seafront and follows the coast path to Axmouth has been previously voted the 9th best race in Runner's World magazine and attracted 168 entrants from Falmouth to Aberdeen and everywhere in-between plus the Canary Islands.

Organisers Paul Mitchell, David Lee and Rob Edwards ensured covid safe regulations were implemented and this included a rolling start time with chip timing which proved very successful and much less stressful at the finish line.

Four of the nine relay teams were made up of SRC runners. Father and son team 'The Clay Twins' aka Tim and Dan Clay had a great run coming in second place, 4:07:17. 'The Bee Gees Medley, comprised of Derek Blackburn running Exmouth to Sidmouth and Clive Gilbert running Sidmouth to Seaton.

Clive was slightly worried when he saw Derek approaching looking slightly worse for wear and knowing the leg he was about to run was a lot hillier. On reaching the finish line in 4:40:31 (5th place) Clive received good news that his lost mobile phone had been found and he didn't need to retrace his steps! Relay team 'Dazzer and Rocker' thoroughly enjoyed the run, with Dazzer running the first leg and Rocker the second. They finished in 4:41:19-7th place.

The four female relay team 'Easier Said Than Run' had to adapt to 3 runners when a disappointed Ann Cole had to pull out due to illness. Julia Haddrell ran Exmouth to Budleigh, handing over to Lesley Dunford who ran to Sidmouth, Jane Stein increased her mileage on the toughest leg, and Lesley Dunford ran the final Beer to Seaton part. They were very pleased with their achievement of finishing in 4:57:23 especially as their average age is 64.75 years!

Sarah Ginsberg was pleased to reach Sidmouth from Exmouth as she was still recovering from illness and David Welsh ran half the route, Sidmouth to Seaton in 3:15:20. Ready to experience her first Exe to Axe, Mighty Green Hannah Maslen was the first runner over the start line. Hannah found the steps past Sidmouth challenging as they led to cramp but all was forgotten as her children joined her to run over the finish line in 5:44:10. First SRC runner over the finish line was Ollie Goodchild-Horne who took the challenge in his stride finishing in 61st position out of a field of 168 in 4:22:02. His dad Adrian 'Gripper' Horne took slightly longer to complete the route due to injury and limited training in 5:40:04 but had his grandson cheering him on along the way and over the finish line. Jamie Locke found his first Exe to Axe tough, tiring and very hot at times especially between Sidmouth and Branscombe but this didn't stop him from enjoying it. The MG crossed the finish line in 4:40:32 in 87th place and is already thinking of entering it again! Michael Garrish completed the race in 5:04:18 and Simon Hollyer, Sam Ingram and Bex McDonald finished in 120th, 121st and 122nd respectively in very similar times-5:16:08-5:16:48. Simon had nothing left in the tank having given it his all and needed a recovery banana on crossing the finish line-it must have done the job as he is also talking about signing up for next year! First timers Sam and Bex had a cunning plan; they had learnt that by climbing up the 'stairway to heaven' they had 14m less of climb and at that point it mattered! Naomi Garrick felt proud as she ran along the beautiful coastal path and felt honoured to live where she does. The MG finished in 139th place in 5:29:56. SRC members who weren't running did their club proud by marshalling the event under Chief Marshal Terry Bewes' supervision. Many of the runners thanked them for their support and enthusiasm which spurred them on. Special mention must go to Jessica and Jasmine Thomson, the youngest marshals but biggest cheerleaders who raised many a smile on Cliff Road and to Danny Painter, who despite recovering from long covid insisted on being the back runner, encouraging all along the way. 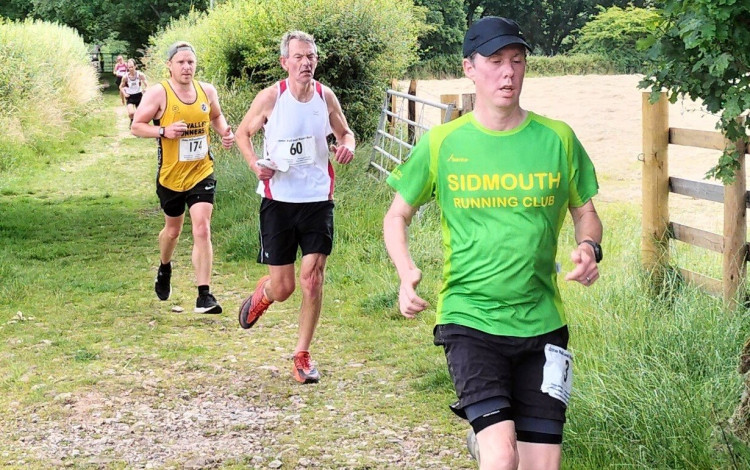 Sidmouth Running Club: The heat is on and the Mighty Greens keep on running! 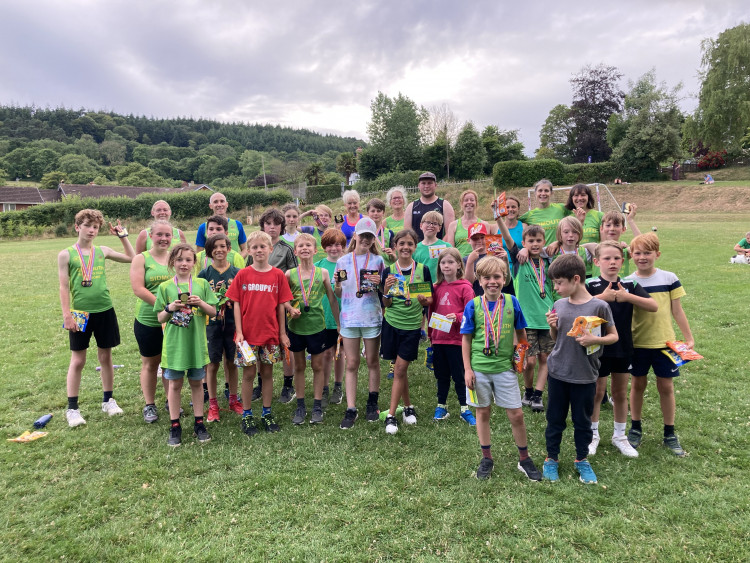